A team of runners / walkers from Kraftwerks marked its 17th year of participation in the Susan G. Komen Race for the Cure® at Buffalo Riverworks on June 9, 2018.

Susan G. Komen’s sister, Nancy G. Brinker, started the Susan G. Komen Race for the Cure organization after Susan lost her battle with breast cancer. Each year races are held all over the United States, from Washington to Massachusetts to Puerto Rico. The Komen WNY Affiliate has raised millions of dollars for the cause. Nearly all the money raised stays in WNY through community outreach programs to improve access to breast health care, education, and support for breast cancer survivors. A portion also goes to breast cancer research through the Susan G. Komen for the Cure National Research Grant Awards.

The Kraftwerks team, named “5Ks for the Cure,” consists of Kraftwerks family members, employees, and significant others. Kraftwerks will donate all participant entry fees, as a way of supporting the event.

Members of the Kraft family became involved when Kraftwerks VP of Sales and Marketing, Ann Marie (Kraft) Ziske’s son, who was eight at the time, encouraged her to run the race. Together that year, Ann Marie, along with her husband and son, ran the race in support of a family friend who was struggling with breast cancer. They have participated each year since, and Ann Marie’s daughter, also started participating a few years ago. Ann Marie later joined the WNY Race Committee, at the encouragement of a friend who had been diagnosed with cancer and was involved in the committee. 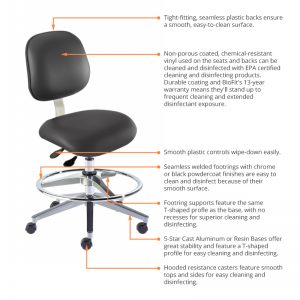 It’s important when considering a sanitary environment to not overlook seating. In today’s environment it’s every bit as essential to consider not only materials and construction of seating, but also cleanability and compatibility with disinfecting agents. BioFit offers technically superior seating solutions including laboratory-grade chairs and stools designed for the demands of laboratories, healthcare, research facilities and clean room operations. They are approved for over 100 EPA cleaner-disinfectant options. And BioFit chairs and stools are stylish, ergonomic and offer long-term comfort and durability.

Learn about the latest news, advice, and products that can improve your work space.